I saw Brandon's post (support your local potter) the other day and thought I would have a go at making a video. I just happened to be making a set of bowls for my concentration and thought it might be interesting for you all to see me trim one of them. I didn't think to make a video of throwing them so that will have to wait. I apologize for the terrible video quality but I think it still serves the purpose.

I have been working on making some sectional vases recently. The photo above shows a series of vases in the order in which they were made from left to right. The vases clearly get better as they move to right and the series progresses. This picture shows my series of vases and my progression through the form but also proves that making in a series works. I found that the key factor for me with this form was getting the proportions of the neck to match the body. The diameter where the neck meets the body and also where the neck ends are conducive to the size and shape of the body of the pot. I enjoy making this form and hope to continue working at it. I also hope to make a post of the process of making one to show you all how. 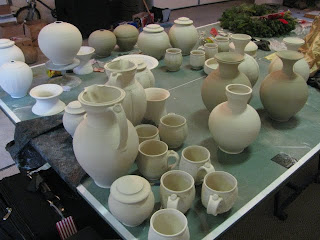 I think its about time to load a bisque!
Posted by MattyT at 4:05 PM 2 comments: 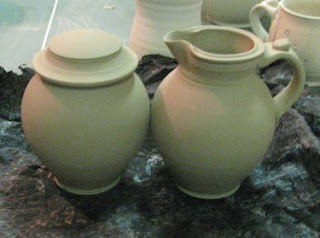 I have been working on making some cream and sugar sets. I have been meaning to make some for a while but never was really that inspired to start. I have been contemplating how to go about this set for a while and tried out a few ideas. I started with the idea that the two pots should start from the same body shape and be the same height. From looking at cream and sugar sets that I admired I realized that the most successful sets were just a mini version of larger pots that that potter makes. So, naturally, I shrunk down my new pitcher form as well as a jar style I like making. I feel that this set is pretty successful but definitely has potential to get better. I am trying to move towards more simple surface decoration to aid the glazing process. Since starting to work with cone 6 I have come to learn to plan further ahead in the making process how the pot will eventually be glazed. I am still working out the kinks with some of my cone 6 glazes but have some promising recipes to go off of. 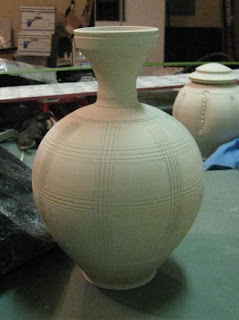 This vase is sort of a twist off of the pitchers I have been making. It is made in the same way but with a narrower neck. I was originally inspired for this form by some of mark Hewitt's larger bottles but it has ended up very similar to Tom's Tang vases. I will have to work to make it my own but I like where the form is heading.
Posted by MattyT at 9:26 PM 1 comment: 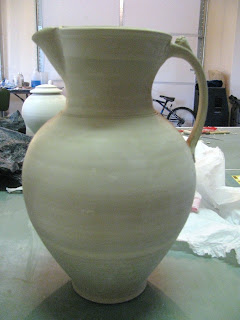 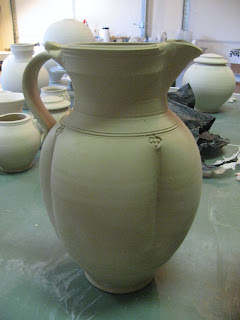 I have continued to work at the pitcher form I mentioned in my last post. I had some problems with the bottoms of the handles cracking off (and pulling an inch away from the pot). At first I was very confused because I had never seen this before. I eventually (at the expense of a few pots). realized that they were cracking of because I was putting the handles on when the top section was more wet than the bottom.
This means that the top would shrink more than the bottom before it was totally dried and pull the handle off of the bottom section. I eventually tried waiting until the top was the same as the bottom to put on the handle and the problem went away. The second picture is the most recent pitcher and I feel like they are continuing to get better. I feel like my ideas are becoming more and more refined and I am working toward something good. On the most recent pitcher I changed the thumb grip because I feel like this kind will be more comfortable and make it easier to poor. I also feel like I have found a happy medium with the handle as far as aesthetics and function. 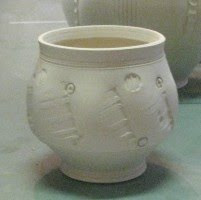