After reading Don Piltcher's guest post on Sawdust & Dirt I have been somewhat cautious about what I choose to post here. This has resulted in less frequent posts but I hope better posts. I am not trying to write magazine articles here but I respect a well written post and try my best to contribute something of worth. 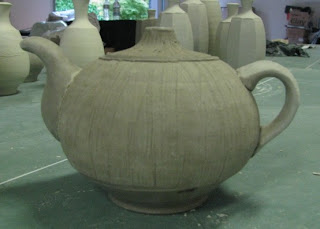 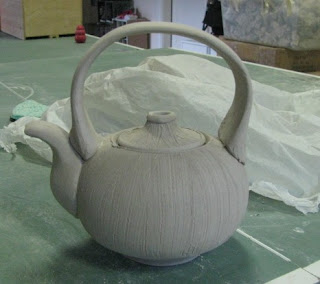 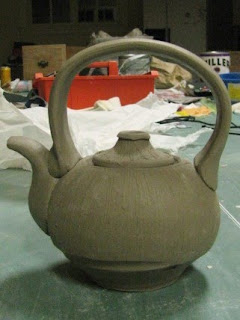 I have been making teapots lately. I made a new press mold for the spouts and I like this one a lot better than the previous one. The shape and scale of the spout are much more fitting to the teapots I want to make. The mold itself is also much better, I guess the more you do something the better you get at it.

I also changed the handle a little. I made it wider than past handles as I find that a wider chunkier handle is more comfortable and also more sturdy feeling. I made the handle attachment on the front overlap the seem of the top of the spout. I have had problems with the spout cracking in this area so I figure this will solve that problem. I also like the look of the handle kind of wrapping around the spout. I also made the negative space created by the handle more of an elliptical shape as opposed to round. This reflects the shape of the pot better and also leaves less room for error as with a round handle it is very easy to detect any bumps in the form.
The body of the pot is new as well as the lid and the feet. I have not made teapots for a while so, naturally, I have found lots of new ideas I want to try. I am continuing on a process that I have described several times of working in a sort of evolving series that will eventually 'hopefully' end with my ideal teapot form.
I have been looking at a lot of medieval English/ancient Japanese inspired pottery, such as the pots of Hamada, and Bernard leach. And more recently, Phil Rodgers and Jim Malone. I am finding it hard to incorporate these ideas into my work while still keeping the pots 'simple' enough for an Anagama firing. I find that the best pots, for me, out of any wood firing but especially an Anagama are strong and confident but simple. This minimalist style sort of leaves a blank canvas for the kiln to paint on. With teapots especially, I find it very challenging to have all of the elements of the pot working in harmony in an uncluttered way.
There are countless small details that aid this minimalist style. Several that I have chosen to incorporate into my design are as follows. A press molded spout- Simple, smooth, and flowing design helps to not distract from the pot as a hole. A lid that completes the spherical shape of the pot- Simple, completes the profile, continues the texture to the last 1/16in of the pot.
The pictures are arranged in the order in which they were made. The first teapot is at the bottom and the latest teapot is at the top of the page. On the latest teapot I switched to a handle on the back of the teapot as opposed to the over the top handle. I found that this handle helps to balance out the spout. The line is continued from the tip of the spout down to the bottom of the spout through the teapot to the bottom of the handle and ending in the top of the handle.
I am reasonably happy with the latest teapot, but I have some new ideas which will drastically change the design. I think they are moving in a good direction and I am excited to see how my new ideas translate in to a three dimensional object.
Posted by MattyT at 12:31 AM 3 comments: 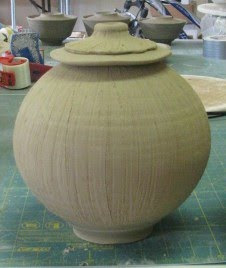 I recently made a series of larger lidded jars. This is a form that I have made a lot of in the past but I haven't for a while. I like making big round pots because they are very satisfying when everything works out. On the other hand, I don't like making these big pots because it is very frustrating when things don't work out. I tried and continued several ideas with this series. I continued with a style of knob which I have been working with. I like this idea because it gives a nice finish to the top of the piece and it gives your eye an upward motion. For whatever reason, to me, upward motion is a positive feeling in a pot. On some of the jars the proportions were a little off, or as with the center jar in the picture below, the form makes the lid appear to sit higher, which I do not like. I think the the jar pictured above, as well as on the left of the picture below, has appropriate proportions as well as a nice form. My criticism of these jars in general is that the form is to round, aka- it does not match the undulating rhythm of the rest of the pot(lid, foot, texture, and trimming marks). The walls of the pot are a little more lively on the rope textured jar on the right of the picture below; however, I would like to find a way the create this liveliness in the wall without relying on the texture to do so. 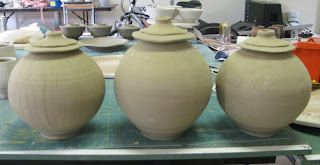 I also tried a new way of signing these pots. I decided to place a small ball of clay inside the opening of the knob and stamp that instead of the bottom of the pot. The theory behind this is that, when examining the finished pot, it may be awkward to pick up this larger pot and search for a makers signature around the foot. However, a viewer will most likely remove the lid and therefor see my stamp on it, making awkwardly handling the large pot unnecessary. Although the scale of these pots may be a bit modest for this feature, I felt that it would still be effective. 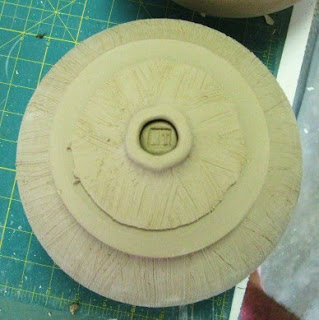 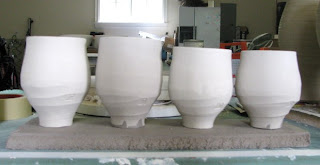 I have also been working more on my cup sets project. I have been making lots of smallish cups similar in style and pattern. I have been using porcelain, an iron rich stoneware, and a porcelainious white stoneware. I also made the first larger 'trays'. I think that four cups is the right amount for these pieces. I am learning a lot about little details that I like in my cups and enhancing them, which results in better cups, simply by making a lot of them. This also helps to make them more 'my own' and to stray further from their original influence.
Posted by MattyT at 3:10 AM 3 comments:

Progress in the Studio 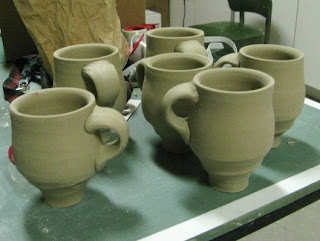 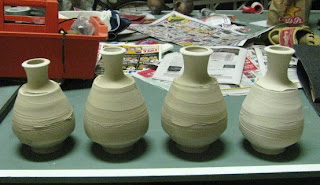 I have been working on a new bottle form recently. These bottles are made in two sections, the body, and the neck. I trim the foot on the body when it is leather hard and then attach the leather hard neck. I like the simplicity of this process but it is hard to get the proportions right this way. I am going to try throwing the neck on top of the body, I have done this before and it makes it much easier to get the shape and proportions right. I like the marks made on the body of the pot by attaching the neck.(surform, trimming, and slip) I attach the neck, then surform it to get the profile I want, then trim off some of the surform marks, then add slip over the join and smooth it with a rib. The slip creates a better join and also comes up over the shoulder which makes it look as though the neck comes from inside the body and not on top of it. I learned this technique from Jason Hess, this is how he makes his bottles. 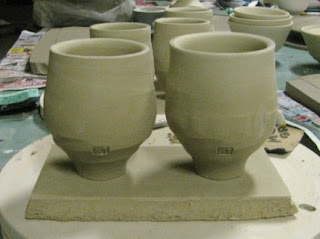 I have been trying to find a way to group several cups or yunomis as a set. I have been making slab trays, such as the one pictured above, to hold these "sets". My idea is to make lots of cups out of several different clays and then group them after they are fired. I'm not sure why but I really like the idea of grouping "sets" after they are fired. I think that this gives the opportunity to make a lot of pots that are for a specific project, as well as to pick the ones that are best after the firing as a set as opposed to making matching forms and grouping them regardless of how they turn out. I think that, with the design I have chosen to go with, they will also have somewhat of a sculptural presence. This is not to say that I don't want people to use my pots but I think these sets may be a special circumstance. I like the idea of taking a cup and putting it in a nonfunctional setting. There is nothing different about these cups that makes then nonfunctional but they will be part of a bigger piece as opposed to standing alone. My intent is to make people think of cups as art. I want to show that cups serve a purpose other than there intended function of holding your drink. 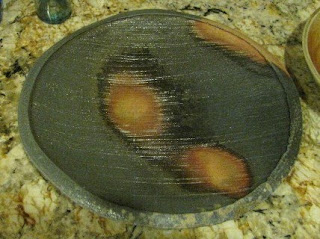 Here is a sneak preview of the pots from NAU. This platter was tumble stacked in the side stoke of the double wide train. The blue color is from the pearl ash that we introduced into the kiln. I am going to take some "real" pictures of the new pots soon and I will post them when I do.
Posted by MattyT at 12:27 AM No comments: 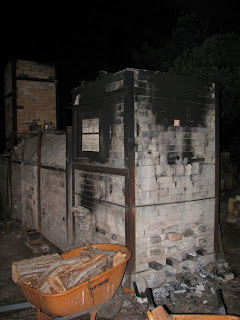 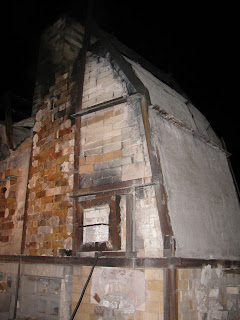 (wood soda side of double cat)
I just got home from a two week wood firing workshop at Northern Arizona University with Jason Hess. We fired the small train (pictured at the top of the page) as well as the double wide train, the wood soda side of the double cat (three times) and the other side of the double cat which is fired with just wood.
I learned a lot about different slips and glazes for wood firing and about firing in general. I met a lot of cool people, had a lot of fun, and fired a lot of kilns. I also got some pretty sweet pots which I will post pictures of in a week or so.
Thanks to everyone who made the workshop possible.
Posted by MattyT at 2:16 AM 2 comments: