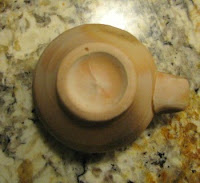 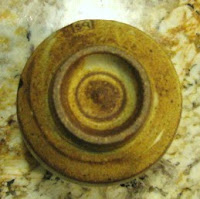 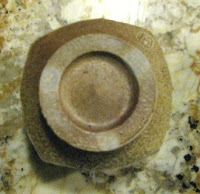 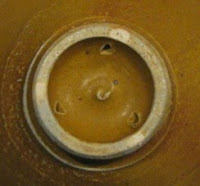 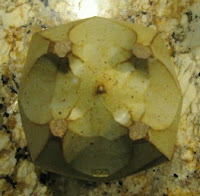 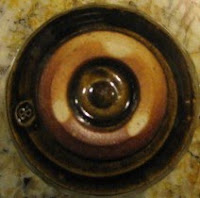 Here are some pictures of some of my favorite feet. These are all pots that I own and non of them were made by me. I really like feet (of pots) for whatever reason, I think most potters do. Feet are often times the best part of a good pot, for me. They are also often what make bad pots bad. I think the pots above represent a wide enough variety and display well what I am interested in. Anyone care to guess who these pots were made by. There are two pots made by the same person but other than that there are no repeats.
Posted by MattyT at 9:28 PM 5 comments: 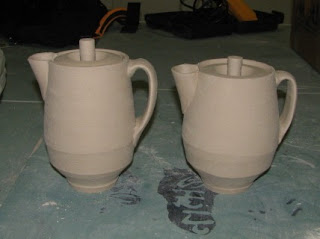 I am finally getting to a point with these lidded pitchers where I feel like I know what I want from them. Meaning that I feel that I have worked out enough of the details so that I can actually be somewhat satisfied with them. This does not mean that they are done evolving, It just means that they are to a point were I will fire them.

The two pitchers above are quite small. I think I would envision them as personal teapots. I am avoiding telling you to many of my ideas about them because I would like to request some feedback on them. I would like anyone who has time to give me a one word critique of the two pitchers above. Just simply comment on the post with the word that comes to mind when you see them. All feedback will be much appreciated.
Posted by MattyT at 7:33 PM 6 comments: 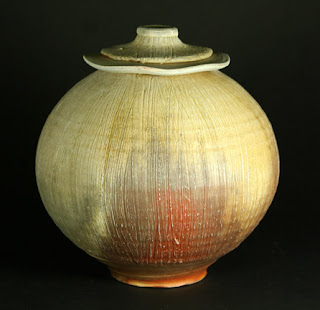 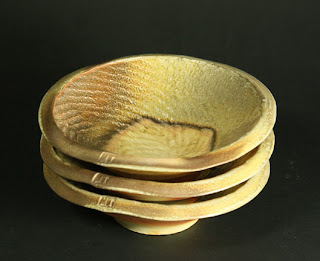 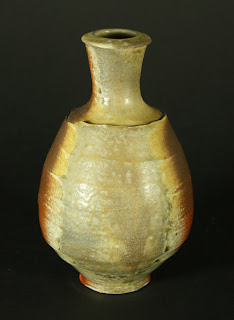 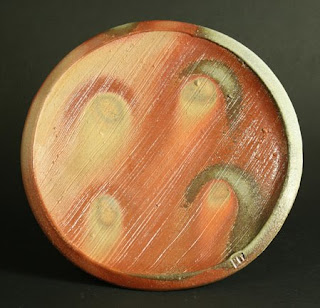 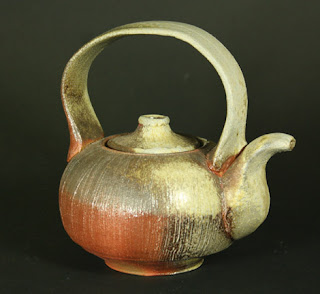 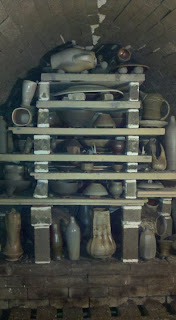 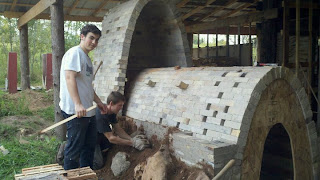 I spent the better half of this past September in Gresham, Wisconsin assisting Simon Levin in firing his Anagama. To date, this has been my most influential experience in ceramics. Working with Simon and his apprentices, who are all very talented potters, has taught me a lot. Through working with them I have learned the importance in deciding who you surround yourself with. It is very inspiring to me to be at the bottom of the pack and feel the need to catch up.

We fired Simon's Anagama for six days and then downfired. Downfiring is a technique Simon developed. It is similar to reduction cooling but he lets the kiln re-oxidise after every stoke in the downfiring as opposed to keeping the kiln in reduction during the entire cooling cycle.

Simon also fires his kiln a lot cooler (in temperature) than most people. Cone ten's were down in the hottest parts after firing for six days. The kiln never got over 2200 degrees. The ash was melted by the heat work as opposed to just temperature, meaning heat over time.

The kiln is fired in a very controlled manor with a detailed hourly kiln log and thermocouple. Simon's goal is to produce lots of "information" on the surface of the pots. He has adapted the firing schedule in order to emphasize the surfaces he wants. He is also very conscious in loading the kiln. Every pot is very carefully wadded in place and some wads are hung between pots to create more information and flame path on the pots.
Posted by MattyT at 12:25 AM No comments:

I have Incorporated a cup form that I have been working with into some pouring pots. I took the essential form of the cup and changed the proportions and size of them in order to make them work with a teapot and lidded pitcher form. Although the cup form was originally influenced by a cup of sequoia millers that I have, I feel that I have stolen the form rather than borrowed it. Stealing means that you take the idea and make it your own while borrowing suggests that you use the idea but do not change it. I have found that using the same essential form for a teapot and cups helps to make sets that "work" visually. 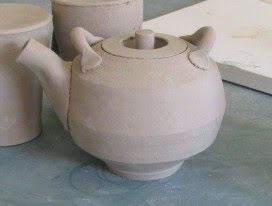 The spout and lugs on this teapot help to balance the angular form of the pot. This teapot will eventually have a woven reed handle. The handle will also aid the balance and help to soften up the angular body of the pot. 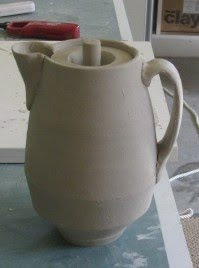 I have been working with a sketch book a lot, drawing pots that I may eventually make. I arrived at this lidded pitcher form by drawing different versions of the aforementioned cup form and stretching the proportions. Then I think about what form it could be and add the necessary parts to the drawing. I think that drawing pots really helps to balance out the proportion of pots and also to weed out a lot of bad ideas.
Posted by MattyT at 12:44 PM 5 comments: